A short summary of farming practices in China

I figure to develop tools aiming small scale farmers in less developed regions, it would be immensely useful to understand their current practices and in which way they can be improved. While the practices differ greatly across regions and are largely unknown to me, in East Asia, the practice is mainly grafting green revolution onto thousands of years of farming tradition.

Because of the dense population, and constrained by the maximum output of 2-3 labourer, China, Japan and Korea are still dominated by peasants on several acres, even less than 1 acre of land per family. The similarities and practices have been vividly depicted in Farmers of Forty Centuries by F. H. King one century ago. Here I’ll focus on China from where I grew up.

Here’s a very typical Chinese peasant carrying farmyard manure passing by a vegetable field. Fermented human and domestic animal faeces and urine are mixed with water and applied near the crops, which can cause spread of pathogen and parasites (Japan does it far better in the recent decades by composting). Nowadays, some chemical fertilizer may be added into the mix to use less farmyard manure with only slight increase of cost. Such circulation is the key to prevent the field from degrading after thousands of years non-rest cultivation, but its labour intensive nature and the none-if-any economic return pushed the younger generations fleeing to factories and cities. 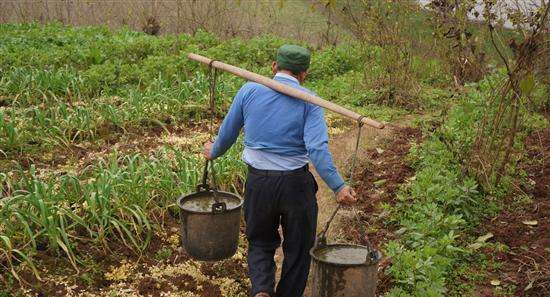 Here’s a small spot of corn with soya bean and sweet potato (planted and harvested in this order), the Chinese version of Three Sisters quite popular in the hilly area. It maximizes the harvest of the land, leaves bare soil only in winter, controls weeds, and require less fertilizer. Pumpkin vines are directed to the bushes and grasses among terraces. Every corner is planted.

On the paddy part, here’s my mother helping my elder sister and brother in law harvesting using sickle (me in the mean time taking the photo). The grains are threshed by repetitively beating the bunch onto a wood lattice placed inside the wood container (placed upside down in the photo). Petrol driven thresher is becoming popular nowadays, though. Terraced paddies are usually located in valleys where water is abundant, while other main crops and vegetables are grown on the slopes. 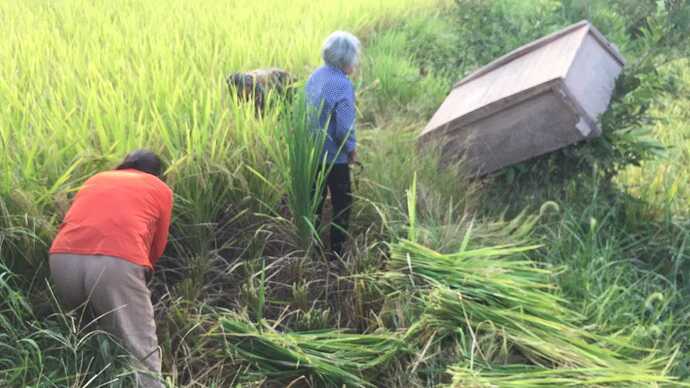 Industrialized farming happens more in plains. Single crop, chemical fertilizer, heavy machinery, herbicides and pesticides, exact copy of the western style. In China, farmland is collective property and assigned to peasant families with no ownership transfer, so merging of land is achieved by either a company renting land from tens to hundreds of peasants, or production cooperatives by peasants. Machines are usually too expensive, so instead of farmers owning combines, there are operators driving combines across provinces like migratory birds to harvest for the farms.

I’d say the above two categories of farmers are more likely the late majority and laggards in the technology adoption curve, because they either don’t have access to new information, hence heavily relying on tradition, or already have big sunk cost on traditional farming practices. Where are the innovators and early adopters? Those “new farmers” who entered the industry with diverse background led by interest, ideal, or hoping to bring family together. They learned from scattered information from different schools, biodynamic, permaculture, natural farming, forest gardening, to name just a few, but with careful observation and experimentation, they could develop methods fit to local conditions, and hopefully inspire other farmers to adopt.

While some emphasize on building a mature ecosystem and do the rest by hand, many still prefer to have machines to help reduce labour. A few weeks ago, I attend a webinar about small scale farming machinery. Some take aways:

No one thought about robotics. Sowing, transplanting, mulching, weeding, always by hand. These lengthy, boring, but not necessarily heavy work drained most of farmers’ time, which could be freed if affordable and reliable robotics can be embedded into the farming practices. I did two years of CSA experiment with my brother in law to supply year round vegetables for 5 families with just half acre of land scattered in 3 discrete spots, and I can still imagine the value of robots in such small pieces of land.

Robots don’t live alone though. Most farmers don’t have the luxury of enough time and information to observe and experiment, and take several years to reach the maximum output. They need simple, tangible, repeatable methods, exactly why industrialized farming could conquer the world, but together with distilled best practices from different schools of regenerative agriculture, robots have the chance to do the same.